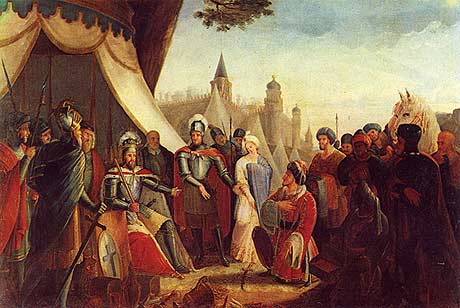 The Siege of Lisbon, Moorish surrender

The Siege of Lisbon, beginning July 1, 1147 and lasted until October 21, he joined the Christian reconquest of the Iberian peninsula, culminating in the conquest of the city from the Moors by the forces of King Afonso Henriques (1112 – 1185) with the aid of the Crusaders en route to the Middle East. It was the only success of the Second Crusade.
After the fall of Edessa, in 1144, Pope Eugene III called for a new crusade in 1145 and 1146. The Pope also authorized a crusade to the Iberian Peninsula, although this was a war of attrition for several centuries now, since the defeat of the Moors in Covadonga in 718. In the early months of the First Crusade in 1095, as Pope Urban II had asked the Crusaders Iberian (future Portuguese, Castilian, Leoneses, Aragon, etc..) To remain on their land, as its own war was regarded as brave as Crusader towards Jerusalem. Eugene reiterated the decision authorizing Marseille, Pisa, Genoa and other major Mediterranean cities to participate in the war of reconquest.
The May 19 sailed the first contingent of Crusaders Dartmouth, England, consisting of Flemish, Normans, English, Scottish and some Germans crossed. According Odo of Deuil, accounted for 164 ships in total – this value probably increased gradually until the arrival in Portugal. During this part of the cross, were not controlled by any prince or king, England was right in the middle of The Anarchy. Thus, the fleet was directed by Arnold III Aerschot (nephew of Godfrey of Louvain), Christian de Ghistelles, Henry Glanville (Constable of Suffolk), Simon Dover, Andrew London, and Saher of Archelle.
The armada arrived in Oporto on 16 June, being convinced by the bishop of Porto, Pedro II Cleats, to take part in this military operation. After the conquest of Santarém (1147), knowing the availability of the Crusaders in helping the forces of D. Afonso Henriques continued to the South of Lisbon.
Portuguese forces advanced on the ground, the Crusaders by sea, entering the mouth of the river Tagus, in June of that year, both forces were gathered, injuring up the first skirmishes in the suburbs west of the hill on which stood the City then today called Low. After fierce fighting, both this suburb, as the the East was dominated by Christians, imposing thus the siege of the affluent market town.
Well defended the city walls proved impregnable. The weeks passed in sorties of the besieged, while the war machines of the besiegers hurled all sorts of projectiles over the defenders, the number of deaths and injuries rising on both sides.
In early October, the work of Shoes on the foundation of the wall succeeded in bringing down a section of it, opening a gap through which the besiegers rushed, bravely defended by advocates. By this time, a wooden tower built by the besiegers was approached the wall, allowing access to the battlement. Faced with this situation, on the verge of an assault on two fronts Christians, Muslims, weakened by skirmishes, famine and disease, capitulated on 20 October.
However, only the next day, the sovereign and his forces enter the city, meanwhile violently sacked by the Crusaders.
Due to this siege arise legendary episodes of Martim Moniz, who would have perished by the victory of the Christians, and even more legendary battle Sacavém.
Some of the crusaders settled in the city, among which stands out Gilbert of Hastings, elected bishop of Lisbon.
After the surrender of a plague epidemic hit the region causing thousands of victims among the population.
Lisbon became, however, capital of Portugal in 1255.