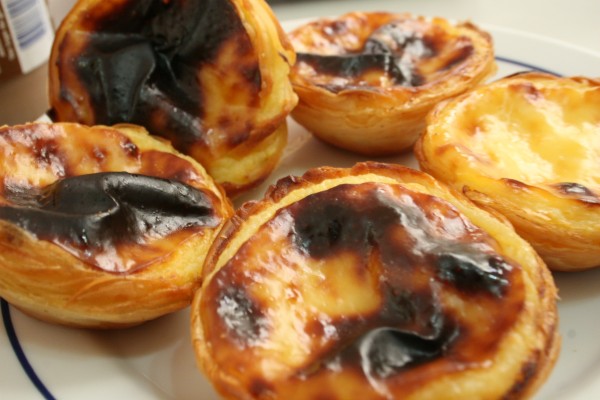 In Belém an obligatory Lisbon  tourist spot , there are some  special pastries , whose fame runs the world : ” the only true factory of Pastel de Belém ” . Throughout the day , every day of the year , about ten thousand tarts, totally handmade , are baked  and ready to eat .

Legend has it that , like most  of traditional Portuguese sweets , the origin of the Pasteis de Belém, have been a recipe from the Jeronimo’s Monastery. With the Liberal Revolution in 1820 , the religious orders were abolished in Portugal , and their convents nationalized . The lay workers who lived there , including confectioners , started to work outside. It seems that the Jeronimos confectioner , holder of precious recipe , was working for a nearby sugar refinery , and within no time the real pastries of Belém were sold to the public in Lisbon the success was immediate , and people flocked to buy the new sweet. With the advent of mass tourism in the last century , the fame of Belém Pastries has ridden world from New York to Japan

Many have tried , in Portugal and abroad , to imitate the product,  but without results . The first candy man , the one who came from the Monastery of Jeronimos , worked at dawn in secret , locked in a room where no one was allowed to go .

The secret has been kept until today, currently only three people are aware of the magic recipe

Resisting industrialization , the sale or the franchise , the tarts are still one of the best  Lisbon´s ambassadors .