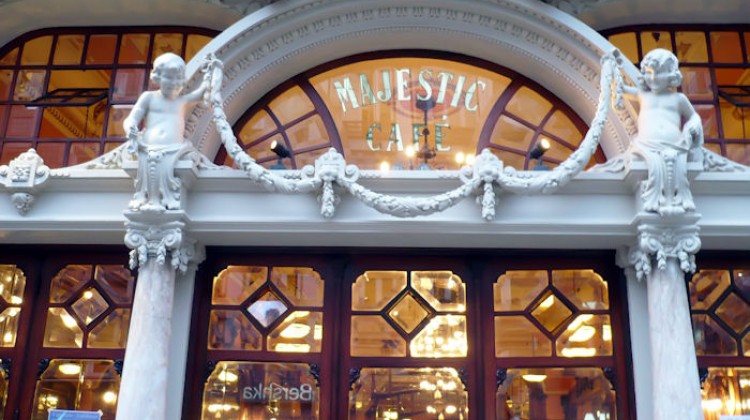 Splendor of the “Belle Époque”

On the 17th December 1921, an establishment called Elite café opened for business in Porto. It was located in Santa Catarina street, a pedestrian walkway for shopping and for the finest members of society, then and now. The café enlightened the street with its Art Nouveau decoration, by architect João Queiroz.

Inside, the scent of leather upholstery and varnished wood is joined by the magnificent vision of the plaster-decorated ceiling and of the endless Flemish mirrors, is an ensemble that marvels all senses. Add in the combination of marble and metal and it becomes truly exquisite. At the back of the café, nature rules in the conservatory, which connects Santa Catarina street to Passos Manuel street.

The opening day, which has become a distant memory, has always been remembered by the city. Many have flocked to this part of the city to learn about the new building that has become to define Porto’s architectural landscape. Appealing to intellectuals, bohemians and to the ladies of high society, when on a walkabout, would sit to drink tea or eat an ice cream.

The cafe had honors and awards and received a distinct visitor, the pilot aviator, and later Admiral Gago Coutinho(who always appeared accompanied by beautiful women), who had just arrived from another risky journey from the island of Madeira. He was pleasantly surprised with the splendor of the new facility and returned there several times in order to contemplate the beauty of all the details of the cafe in the company of famous actress Beatriz Costa.

Although this was a successful opening, the name Elite carried a hint of monarchy that did not go well with the republican, bourgeois and chic atmosphere of Porto at the time.

The glamorous cultural elite from Paris was a reference for portuguese culture in those days. Hence the new name –Majestic – filled with all the charm of “La Belle Époque”