The History of Oporto´s Ribeira 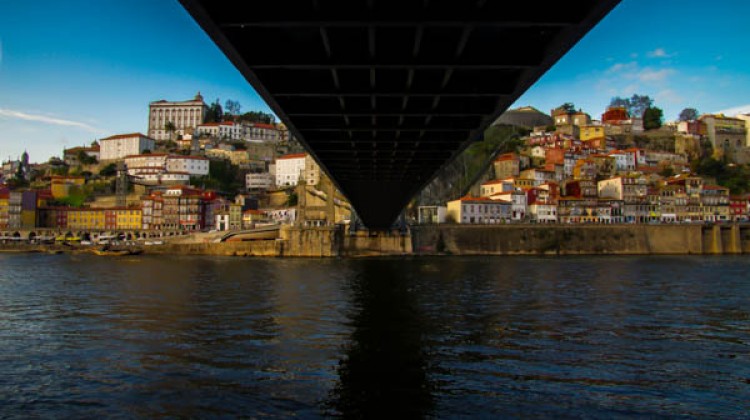 The Ribeira of Porto along the Douro River, is one of the most typical of the city of Porto and integrating the Historic Zone, part of the World Heritage Site designated by UNESCO. Today it is a place of bars and restaurants very popular, especially with tourists. 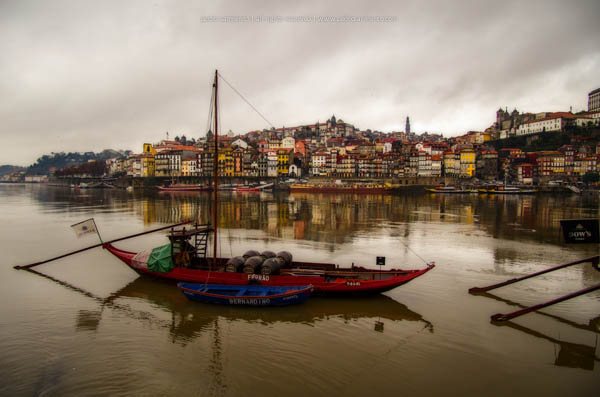 Some of the strengths are the Praça da Ribeira, also known as Square Cube, the Street Source Taurine, one of the oldest in the city, the wall of Bacalhoeiros and House of Prince, where he was born in 1394 the Prince Henrique.
The Praça da Ribeira is of medieval origin, time in which there existed a large economic activity due to the presence of a river port. Eventually became a zone of intense trade with tents selling and auction.

In 1491, there was a large fire in the area, to which succeeded a process of reconstruction, and there was the option for homes with open columns over the river from the central square and the floor slab. This new aspect of the Ribeira do Porto is very approximate to what currently exists.
In March 1809, a tragedy occurred in that place, which was known for Tragedy of the Bridge of Boats. The advance of Napoleon’s troops made the people ran in droves to the bridge made of boats that could not stand the weight of the crowd and finally gave in, dropping a lot of people to the river. A bas-relief by Teixeira Lopes (father), placed at Cais da Ribeira, alludes to the tragedy. Later was built a suspension bridge whose pillars on the north bank still there, right next to the Bridge of Don Louis I, inaugurated December 31, 1886.
In the second half of the eighteenth century there were major renovations in Porto’s Ribeira district and was one of the beneficiaries. Thus, in place new streets were opened and created terraces overlooking the river works financed by the creation of a tax on the wine trade.
Even in the nineteenth century, was built between the arches one Ribeira Square and the western side, which was leaning against the wall of Fernandina. This was inspired by the Adelphi arches, old warehouses in the port area of ​​London.
In the 80s of the twentieth century, there was a revival of Ribeira do Porto with the opening of numerous nightclubs. It became the meeting place for nightlife. Also performed the traditional Ribeira Market Numas tents right next to the river.
It was in this area of ​​Porto who lived one of the most charismatic figures in the city, called the Duke of Ribeira(Duque da Ribeira), known to have saved several people from drown. He was made a tribute after death, having been immortalized in the square beside the pillar of Luis I Bridge, which received its name and where it was placed a headstone. 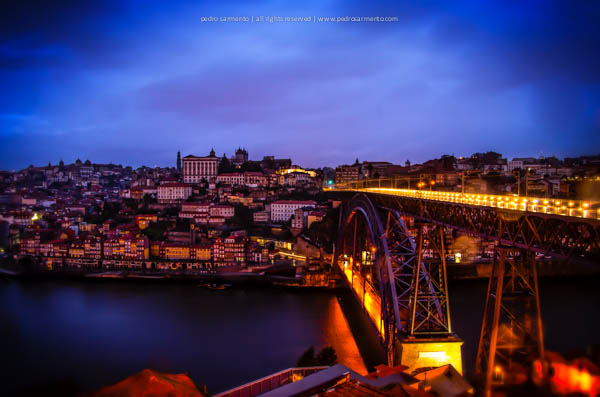 Place of contrasts, in Ribeira the two realities coexist. Is a starting point for all city tours and cruises that furrow the waters in up-and-down relentless, picture postcard where every day multiply the terraces, the wine shops and restaurants and the best-known part area classified by UNESCO as World Heritage. Is your face sun, cheerful, curious, observed by a swarm of eyes and cameras focused on the fronts now painted bright colors, sometimes covered with tiles, with the slowness of the river, the uproar of doves and fruit enclosed in boxes between cafe tables.

In another, where life unfolds in alleys so tight that the sun only then lingers briefly loosens up slang denser borough, children descend the staircase railings that divide, the water flows by sight and sound Domestic mixed with small workshops. There were some signs that denounce the twenty-first century and are normally considered to have traveled to the Middle Ages, as the atmosphere, narrow streets, odors unclassifiable.

History, because it is what we demand, is on every corner, much brighter in the streets as in quelhos cubby holes. The layout of streets, houses encavalitadas uphill wide with tiny fountains and shrines to saints absent give us a vision of antiquity next area confined within the walls Fernandina. The slope Guindais the East, and Miragaia beach, opposite, were already territories abroad. Grew within the walls of the temples, the palaces, the dwellings of people so humble that the breadth of a window was – still is – enough to accommodate an entire family. But also gardens, orchards and olive groves, watered by small streams, however missing in the granite of the avenues.
The tram can be a good means of transport to reach the Ribeira
Along the river is not difficult to imagine the bustle of medieval port: a multitude of merchants, tax collectors, fishmongers from baskets balanced on the head, buyers, thieves and prostitutes. The crossing to the other side is then made through a bridge resting on boats. It was there that, in March 1809, occurred the tragedy of Ponte das Barcas, when the population, surprised by the advance of Napoleon’s troops, fled towards Gaia. Too fragile, the passage could not resist the excessive weight and finally gave reaping countless lives. In the same place, early in the Cais da Ribeira, a bas-relief bronze by Teixeira Lopes (father), known as the Alminhas Bridge, play the event. Always lit candles and some flowers, fresh or plastic, prove that it remains fresh in the minds of the locals. The subsequent suspension bridge whose stone pillar is still clearly visible, would be replaced by the current bridge D. Louis I, opened the last day of December 1886 and designed by Belgian engineer Theophile Seyrig, collaborator Gustave Eiffel.
Terrace where you can eat traditional francesinhas
The Ribeira Square was as whole face riverside, Intramural collected. Trade area teeming with tents and a pout, suffered a terrible fire in 1491. The subsequent construction of houses with columns and wide open on the floor paved drew you a new profile. At number 1, for doors, access now to Porto Carlton Hotel, which occupies six contiguous buildings with rooms facing the river and the Rua da Fonte Taurine, one of the oldest in town. Wedged between these two buildings, the Postigo Coal is the only surviving gate of the wall that connected to the Pier Stowage, main harbor city. Today, there are sailboats instead of ships, while Rabelo boats carry tourists instead of the wine barrels.
Typical facades of houses
With the end of the need defensive wall, this came to be used as street, several buildings being erected to her addorsed. With wrought iron balconies, laundry left in the wind and cages hanging from escaping the symphony of canaries, houses the Wall of Bacalhoeiros have often opened the doors to our curiosity. The place names have nothing to do with that, but it was there, at number 114, who was born in February 7, 1851, José Luís Gomes de Sá, creator of one of the most famous dishes of Porto. Our tour continues to the Largo do Terreiro, where the chapel of Our Lady of O, built in the seventeenth century where there was a hospital.

Alminha one of the historic buildings in the neighborhood UNESCO
It’s time to step back a bit further in time. We are in 1120, the year in which D. Teresa delivers the tutelage of the borough to Bishop Hugo is responsible for the reorganization of its administrative and economic life. However, the growing metropolis and trade riverside gains courage. Aware of the income arising from it, the Crown tries to control the customs activity, engaging in a confrontation with members of the clergy, true masters of the city. At issue was the location of the building to be erected, that the Church did not admit to your couto, even threatening D. Afonso IV of excommunication, in conflict with the real power that lasted for almost a century. Nevertheless, the King ordered the construction of the Royal Customs House, which began in 1325. Subsequent amendments and increases does not sacrificed the essence, and is opposite to that same place we are now.
Rabelo boats that carry tourists today in place of the wine barrels
Casa do Infante, as it is known, was the birthplace of Prince Henry, to March 4, 1394, due to an extended stay at the Port of King John D. and Philippa of Lancaster. Indeed, the towers served as customs almoxarifes and housing were the main building of the royal city. Even before the birth of the prince was also erected in an area annexed the Mint, which was to work with interruptions, until the mid-eighteenth century. Embracing the Pole Medieval City Museum, in the North Tower can be seen some of the coins minted there, old pottery a virtual reconstruction of the evolution of the building as well as a reproduction of a Roman mosaic, discovered under the pavement medieval vestige of a palace of the fourth century of our era. Very interesting is the scale model that reproduces the city in the Middle Ages. With the help of an electronic board we realized the location of their churches and synagogues, the manor houses, the gardens and markets, cemeteries and prisons.

Just above the street, awaits us graceful Infante Square. But yet that is where our feet in forward. Already accustomed to walking medieval, still want to calcorrear vetusta Reboleira Street, which retains two copies of sixteenth-century houses. The number 55 holds windows and Gothic portals, while the neighbor number 59 presents a structure of tower-house, with its battlements on top. Although also belonging to the parish of S. Nicholas, I confess that I doubt if the Church of S. Francisco is still within the limits “official” quarter of Barredo, that Ribeira part. However, getting the two steps (almost literally) from where I find myself now, it was a sin to be subject to castrating geographies.

There will certainly be the oldest temples and other more beautiful and larger. But no, in the whole country, has the same exuberance in gilt. The sober dark granite exterior and lines the only Gothic church in the city become, once transposed the entrance, a huge box lined with gold. Fascination with Aladdin, I walk the nave towards the altar. Ceiling, columns, chapels, altarpieces, transepts – almost not see stone, which is covered by numerous works of great artists were carving class over the seventeenth and eighteenth centuries. It is the baroque in its heyday, most notably the Jesse Tree and the Chapel of Our Lady of Solitude, one of the most precious examples of Rococo Porto. The tour continues through the small museum belonging to the Franciscan Order, whose catacombs house a private cemetery used from 1746 until the ban on burials in churches, in 1866.

Next door is the Palácio da Bolsa, elevation in place of the former convent of the same order. Building neoclassical lines, the British influence, houses inside various divisions of interest, such as the magnificent Hall of Nations, covered by a glass structure, the Hall of Portraits, where the Portuguese monarchs live with a stunning inlaid table, work a former employee of the home, the Court Room and Library.
Rabelo boats that carry tourists today in place of the wine barrels
The real ex-libris of the Porto Commercial Association, however, is the stunning Arab Hall, with its delicate carvings of gold on blue, inspired by the Alhambra Palace. True living room, where occasionally perform concerts or gala dinner, hosted figures like Mouzinho Albuquerque, Gago Coutinho and Queen Elizabeth II