Panorama: Castle of Tomar with the Convent of Christinside. The citadel with the keep is seen in the centre of the image and the round church (with a bell-tower) is to the right. 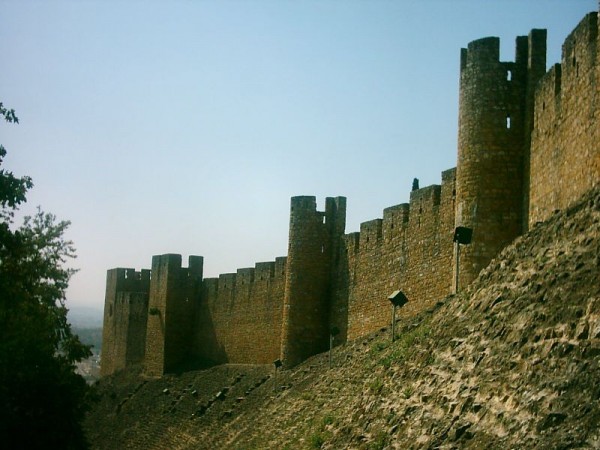 The castle of the Knights Templar of Tomar was built by Gualdim Pais, provincial Master of the Order of the Temple, around 1160. Later in that century, the castle was chosen as the headquarters of the order in Portugal. The castle of Tomar was part of the defence system created by the Templars to secure the border of the young Christian Kingdom against the Moors, which at the time (mid-12th century) corresponded approximately to the Tagus river.

The famous round church (rotunda) of the castle of Tomar was also built in the second half of the 12th century. The church, like some other templar churches throughout Europe, was modelled after the Dome of the Rock in Jerusalem, which was believed by the crusaders to be a remnant of the Temple of Solomon. The Church of the Holy Sepulchre of Jerusalem may also have served as model.

According to Christian chroniclers, the castle of Tomar resisted in 1190 the attacks of caliph Abu Yusuf al-Mansur, who had previously taken other Portuguese strongholds to the South. A plaque near the entrance of the castle church remembers the feat. 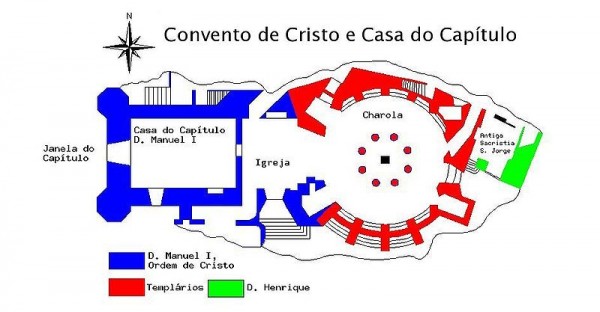 The Templar order was suppressed throughout most of Europe from 1312–1314, but in Portugal its members, assets, and partly its membership were transmitted to the Order of Christ, created in 1319 byKing Dinis. The Order of Christ moved to Tomar in 1357, which became its headquarters.

One of the most important Grand Masters of the Order was Prince Henry the Navigator, who ruled the Order from 1417 up to his death in 1460. Prince Henry gave great impulse to the pioneering Portuguese expeditions during the Age of Exploration. In the Convent, Prince Henry ordered the construction of various cloisters and other buildings. He also sponsored urban improvements in the town of Tomar itself.

Another important personality related to the Order was King Manuel I, who became Master of the Order in 1484 and King of Portugal in 1492. Under his reign there were several important improvements in the Convent, specially the addition of a new nave to the round church and its inner decoration with paintings and sculptures.

The successor of Manuel I, King John III, demilitarised the order, turning it into a more religious order with a rule based on that of Bernard of Clairvaux. He also ordered the construction of a new cloister in 1557, which is one of the best examples of Renaissance architecture in Portugal.

In 1581, after a succession crisis, the Portuguese Nobility gathered in the Convent of Christ in Tomar and officially recognised Philip II of Spain (Philip I of Portugal) as King. This is the beginning of the Iberian Union (1581–1640), during which the Kingdoms of Portugal and Spain were united. The aqueduct of the Convent was built during the Spanish reign.