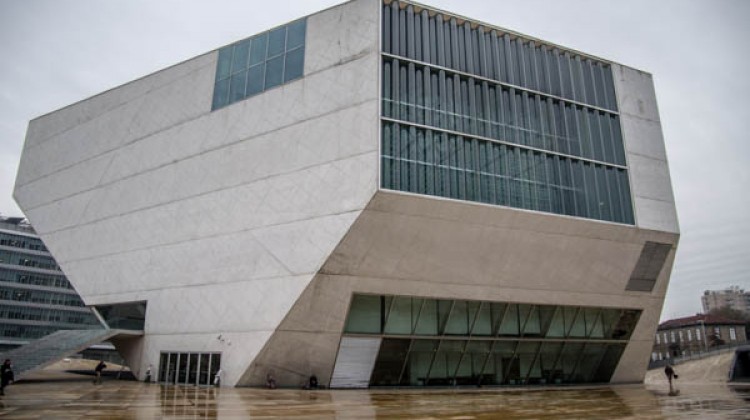 It is the major concert hall space in OPorto.  It houses the cultural institution with the same name and its three orchestras :Orquestra Nacional do Porto, Orquestra Barroca and Remix Ensemble.

It was designed by the Dutch architect Rem Koolhaas with the Office for Metropolitan Architecture and the Arup-AFA.  Built as part of Oporto’s project for European Culture Capital in 2001  was only finished in the first half of 2005 and  immediately became an icon of the city. The Building engineers were Arup (London)  and Afassociados (Porto), the Inside Outside (Petra Blaisse) designed the large 13 curtains, ranging from 22mx15m to 65mx8m, and the pattern grain wood  gold leaf on the large auditorium.

Although the opening day concert took place on the April 14th with Clã and Lou Reed, the building was inaugurated on April 15th, 2005  by the Portuguese President. The Prime-Minister and many other notable politicians and OPorto society were present for the concert by the Orquestra Nacional do Porto.

Casa da Música was built just across from one of the main traffic and business centers of the city, Praça Mouzinho de Albuquerque, known as Rotunda da Boavista. This used used to be a garage for the  Oporto Tram. Although construction lasted four years over schedule and cost roughly €100M the building process brought new engineering challenges in order to create its unusual configuration.

The building’s design has been highly acclaimed worldwide. Nicolai Ouroussoff, architecture critic from the New York Times, classified it as the “most attractive project the architect Rem Koolhaas has ever built” and saying it’s “a building whose intellectual ardor is matched by its sensual beauty”. He also compares it to the “exuberant design” in Frank Gehry’s Guggenheim Museum in Bilbao, Spain. “Only looking into the original aspect of the building, this is one of the most important concert halls built in the last 100 years”. He compares it to the Walt Disney Concert Hall, in Los Angeles, and the Berliner Philharmonie.

Casa da Música has two main auditoriums, though many other areas of the building can very easily be adapted for concerts and other musical activity (workshops, educational activities, etc.).