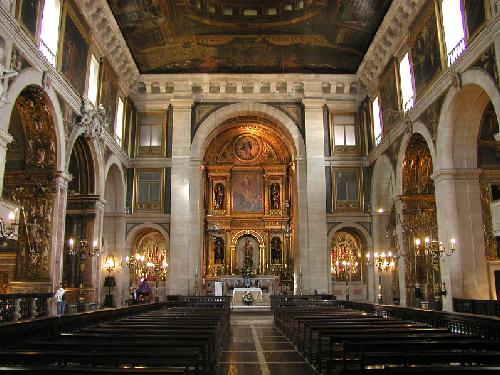 The Church of São Roque is a Catholic church in Lisbon, dedicated to St. Roch and sent build in the late sixteenth century, with the collaboration of Afonso Alvares Alvares and Bartolomeu Alvares. Belonged to the Society of Jesus, and its first church in Portugal, and one of the first Jesuit churches worldwide. Was the principal church of the Company in Portugal for more than 200 years before the Jesuits were expelled from the country in the eighteenth century. The church of San Roque was one of the few buildings in Lisbon to survive the 1755 earthquake relatively unscathed. Both the church and the house was sold to help Santa Casa da Misericordia de Lisboa, to replace their church buildings and destroyed in the earthquake. Remains part of the Santa Casa today.

When it was built in the sixteenth century, was the first Jesuit church designed in the style to be “church-auditorium”, specifically for preaching. Has several chapels, especially in the Baroque style of the seventeenth century original, the most notable being that of St. John the Baptist, of the eighteenth century, the original project by Nicola Salvi and Luigi Vanvitelli, then changed with the intervention of the chief architect Johann Friedrich Ludwig, as shown by the correspondence between Ludwig and Vanvitelli, published by Sousa Viterbo and R. Vicente de Almeida in 1900. Ludwig sent a series of drawings to Italy with the changes imposed since Vanvitelli refused to change the initial project. Was commissioned in Italy by D. John V in 1742. Arrived in Lisbon in 1747 and was only settled in 1749. It is a masterpiece of Italian art, unique in the world, consisting of mosaic pictures executed by Mattia Moretti on cards Masucci, representing the Baptism of Christ, Pentecost and the Annunciation. Suspended dome, coffered Jasper moldurados bronze wonder one crowing of excellent execution of Italian jewelery, framed by a brave group of marble statues. It is assumed that at the time was the most expensive chapel in Europe.
The facade, simple and austere, then follows the canons imposed by the Reformed Church. In contrast, the interior is enriched with gilded wood, tiles and paintings and was an important decorative arts museum Mannerist and Baroque. It has tiles of XVI and XVII centuries, signed by Francisco de Matos.

The ceiling painting with interesting features coffered symbology. The hoist, Mannerist and Baroque is rich and varied, with altars and altarpieces framed paintings. There are colored marbles embrechados the Italian and good collection of liturgical.

Next to the building in Largo Trindade Coelho, is the Sacred Art Museum of San Roque, which has compartments connected with the church.