Originally, the home for the Hieronymite religious order, was built by the Infante Henry the Navigator around 1459. The chapel that existed there, to the invocation of Santa Maria de Belém, was serviced by monks of the military-religious Order of Christ who provided assistance to pilgrims who transited the area. The small beach of Praia do Restelo was an advantage spot, with safe anchorage and protection from the winds,sought after by the ships that entered the Tagus. The Hermitage of Restelo (Portuguese: Ermida do Restelo), as it was known, was already a hermitage in disrepair, when Vasco da Gama and his men spent the night in prayer before departing on their expedition to the Orient in 1497. 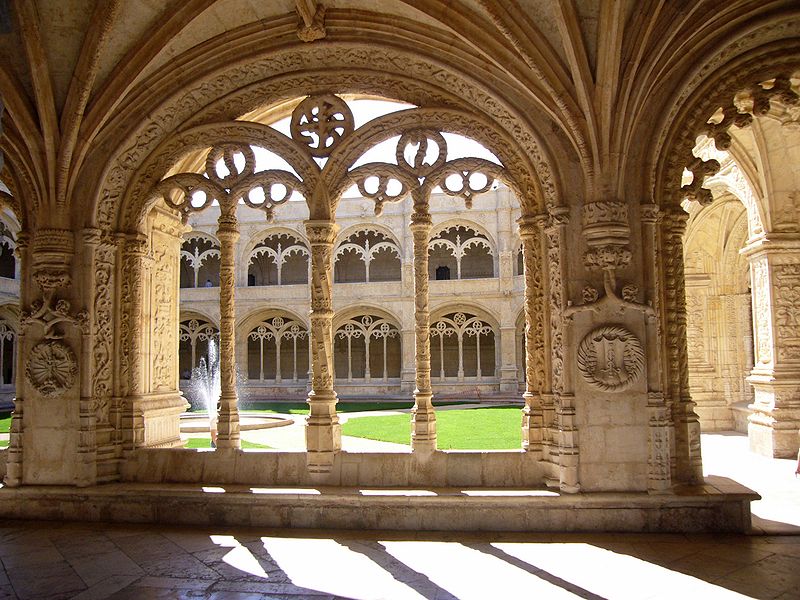 The existing structure was started on the orders of Manuel I (1469–1521) at the courts of Montemor-o-Velho in 1495, as a final resting-place for members of the House of Aviz-Beja, in his belief that an Iberian dynastic kingdom would rule after his death. In 1496, King Manuel petitioned the Holy See for permission to construct a monastery at the entrance of Lisbon, along the margins of the Tagus River.[2] It was after the arrival of Vasco da Gama, a year later, bringing with him samples of gold he discovered, that the monastery became a representation of Portuguese expansionism, and that the church became a house of prayer for seamen leaving or entering port.

The construction of the monastery and church began on 6 January 1501 (and were completed 100 years later).[1][2] King Manuel originally funded the project with money obtained from the Vintena da Pimenta, a 5% tax on commerce from Africa and the Orient, equivalent to 70 kilograms (150 lb) of gold per year, with the exception of pepper, cinnamon and cloves (which went directly to the Crown.[1][2] With the influx of riches, the architects were not limited to small plans, and resources already prescribed for the Monastery of Batalha (including the Aviz pantheon) were redirected to the project in Belém.

Manuel I selected the religious order of Hieronymite monks to occupy the monastery, whose role it was to pray for the King’s eternal soul and to provide spiritual assistance to navigators and sailors who departed from the beach of Restelo to discover the world.[1][2] This the monks did until 1833 (over four centuries), when the religious orders were dissolved and the monastery was unoccupied.

The monastery was designed in a style that later became known as Manueline: a richly ornate architectural design that includes complex sculptural themes incorporating maritime elements and objects discovered during naval expeditions, carved in limestone. Diogo de Boitaca,the architect, pioneered this style in the Monastery of Jesus in Setúbal. On this project Boitaca was responsible for the plans and contracting work on the monastery, the sacristy, and the refectory. He used calcário de lioz, a local gold-coloured limestone, that was quarried from Ajuda, the valley of Alcántara, Laveiras, Rio Seco and Tercena, for its construction. Boitaca was succeeded by the Spaniard Juan de Castilho, who took charge of construction around 1517. Castilho gradually moved from the Manueline to the Spanish Plateresque style, an ornamentation that included lavish decorations that recall silverware (Spanish: plata). The construction came to a halt when the King Manuel I died in 1521.

There were several sculptors who made their mark on this building. Nicolau Chanterene added depth with his Renaissance themes. The architect Diogo de Torralva resumed the construction of the monastery in 1550, adding the main chapel, the choir, and completing the two stories of the monastery, using only Renaissance motifs. Diogo de Torralva’s work was continued in 1571 by Jérôme de Rouen (also called Jerónimo de Ruão) who added some Classical elements. The construction stopped in 1580 with the union of Spain and Portugal, because the building of the Escorial in Spain was now draining away all the funds.